The Hope High School tennis courts in Providence resurfaced in 2019 at a cost of $75,357 and are already creaking after just a year, with much of that time sitting idle between the winter months and the coronavirus lockdown .

The contract was awarded on April 29, 2019. It is unclear why the project was only completed in August, just days before the start of schools in 2019.

The contractor has left rubbish and barrels around the courts – many of which are open and unsecured. 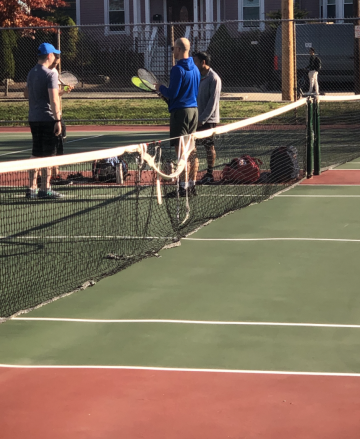 The courts are in poor condition PHOTO: GoLocal

“Courts this old will usually show new cracks year after year because the older they get the more they crack. Courts over 20/25 years old are usually on borrowed time if not maintained year after year. The warranty is next for the work done last year,” said Feely.

1. All structural cracks sealed using the Armor Crack Repair System are under warranty, so if any fail, they will be repaired free of charge.

2. Any non-structural cracks that have been sealed are not warranted as this product is only designed to last one season.

“Out of curiosity, why are you contacting me about this and not the city that awarded the job?” Feeley added.

City officials had not responded to GoLocal at the time of publication.

In addition to the cracks on the courts, rubbish is piled up and the nets of two of the courts are in poor condition.

This is not the first problem with the courts. In August 2019, GoLocal disclosed the barrel spill on site.

Areas adjacent to tennis courts and grounds at Hope High School in Providence were littered with dozens of 55-gallon drums and other containers. 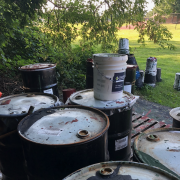 In the bushes were dozens of other containers. Most drums and containers carried warning labels stating that the materials are “carcinogenic” or “products not to be stored in direct sunlight”.

Barrels were unsecured – thrown haphazardly, some without lids. On some containers, the lids could be easily removed. Others contained liquid and had corks.

Just beyond the tennis courts is the school track, and there is a playground about 75 meters away – all accessible to the public.

Some of the littered containers were marked “Keep out of reach of children”.

Following GoLocal’s 2019 story, trash was cleared from the site.

Trash left behind in 2019 PHOTO: GoLocal

From June 2021 to fall 2022, the school’s tennis courts will be closed for tennis practice and used to store construction materials for the construction of the new auxiliary gymnasium. The tennis team will not have courts at the school for training or staging matches until the spring 2023 men’s tennis season. These courts will […]

AUGUSTA – City councilors have approved a five-year, $ 28.7 million capital improvement plan for Augusta. The plan includes funding – for next year – for the purchase of a new fire engine and ambulance, repairs to the city’s parking lot that would allow it to reopen its now-closed upper deck and plans to pedestrian […]

Tennis coach and mother of popular tennis stars Andy and Jamie Murray shared her joy at the fundraising on Saturday saying it was “great news for tennis.” Ms Murray returned to Twitter on Monday morning to urge Scotland not to miss the opportunity to renovate its tired tennis courts. Register now to our daily newsletter […]