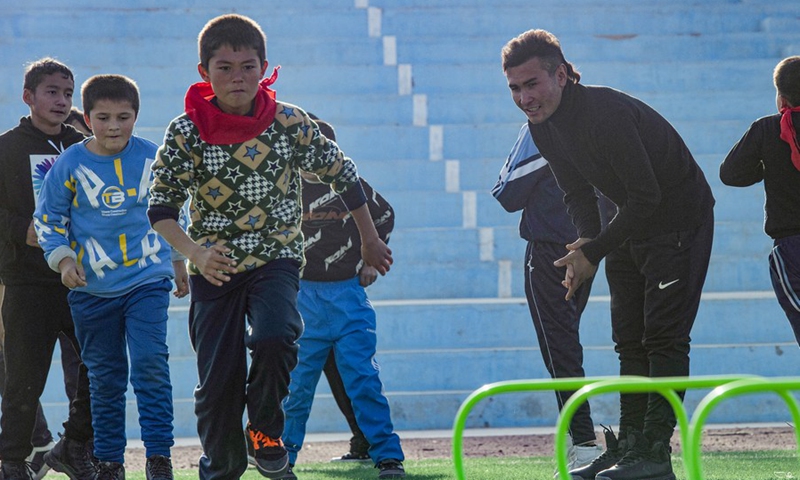 For 21-year-old Nurmemet Sherep, shooting a soccer ball into the net without raising dust or gravel remains a new and exhilarating experience.

Almost three months ago, the soccer player ran for the first time in his life on a grass-covered pitch of a national level soccer match, instead of the bumpy cultivated land where he practiced soccer during most of his childhood.

“When I scored a goal for our team, I realized that I had finally become a footballer. This is what I dreamed of as a kid,” said Nurmemet Sherep, Xinjiang Tianshan Leopard Football Club member. , the only professional football club in the Xinjiang Uyghur Autonomous Region (northwest China).

Born and raised in Shufu County, Kashgar Prefecture (southern Xinjiang), Nurmemet Sherep became interested in soccer in 2010 after joining the Saybagh County Central Primary School soccer team while ‘he was in fourth grade.

“I thought it would be great if I could one day join a professional football team,” he recalls.

At that time, his family was deeply in debt and tried to make a living by raising cattle and cultivating crops, and buying a soccer ball or jersey was an unthinkable luxury.

His parents were therefore initially not very favorable to his dream. They hoped he could study hard in school to get into college and then land a job as a teacher or a police officer, which would provide him with a stable income.

However, that didn’t stop him from frequenting the narrow alleys, sheepfolds, and a cornfield next to his house in the village of Yukarki Kapa, ​​all of which served as a makeshift training ground. Instead, he spent most of his free time practicing in secret.

Without enough pocket money to buy a soccer ball, he made one on his own, stitching up a broken ball he found in the village and patching its leaks with glue.

With no equipment to train on, he collected everything he found and built his own sports field: a cornfield covering nearly 1,500 square meters as a pitch, a hole in the wall of a silo like goal and the wheels of an abandoned donkey cart. as exercise equipment.

Thanks to his efforts, Mehmudjan Tohti, his teacher and football coach, was impressed with his performance in a football match with another elementary school in the county.

“We won this game and he was the best. To encourage him, I bought him a football as a reward,” said Mehmudjan Tohti. “Now he carried this ball wherever he went.

It was the first football Nurmemet Sherep ever owned. For him, more importantly, it was also a motivation that ignited his continued love for football.

During his high school years, he redoubled his efforts.

“Back then, I would run about 40 minutes each way from home to school and back every day, even on bitter cold days, taking the exercise as a warm-up for four hours of football training at home. ‘school.”

In 2018, he was admitted to a technical college in Kashgar and majored in Xinjiang cuisine after failing to enter a sports college.

“I thought that since I didn’t make it, I would give up football and become a chef in the future.”

However, his disappointment quickly evaporated when the college’s newly renovated pitch rekindled his love of football.

In November 2019, Nurmemet Sherep created an account on the popular Chinese short video platform Douyin and uploaded videos focusing mainly on his daily training in the cornfield.

The videos have become an important turning point for him.

In May 2020, Xinjiang Tianshan Leopard Football Club saw videos of him on the platform, urging him to come to the regional capital Urumqi for a tryout. “I was so happy that I immediately put my things away and stayed awake all night.”

But reality quickly provided a wake-up call. The coach spotted gaps in his performance in aspects such as teamwork and skills. “Shortly after I got back, I did exercises based on the coach’s advice.”

Five months later, the team again sent him an invitation for another try. This time, he signed a one-year contract with the team.

“After I signed the contract, I cried when I left because I felt I was one more step towards my dream,” he said.

In October this year, he scored a goal for his team in a domestic soccer match, becoming an overnight sensation on social media.

Currently, Nurmemet Sherep has more than 830,000 followers from all over China on Douyin, receiving words of encouragement from them. He decided it was time to return his kindness and pass on his football knowledge to the students in his hometown.

From October this year, in addition to off-season training and agricultural work, he went to primary school where he studied and regularly taught students the basics of football, together with his teacher Mehmudjan Tohti.

“I will continue my career. Maybe one day I can play for the China national soccer team and make a contribution in my own way,” said Nurmemet Sherep.

Parampal Singh (33), a farmer for 15 years from the village of Teona in Bathinda, has never heard of a program which is a key product for all agricultural departments in the country to improve farmers’ incomes and d ” improve crop yields. “Can you explain what it is,” he asks, revealing the huge knowledge […]

Egypt is committed to strengthening the capacities of Africans in various fields: Shoukry

Egyptian Foreign Minister Sameh Shoukry on Sunday opened the meeting of the standing committee for monitoring Egyptian-African relations, which is held under the chairmanship of the Ministry of Foreign Affairs and the composition of various ministries, government agencies and the private sector. Foreign Ministry spokesperson Ambassador Ahmed Hafez said Minister Sameh Shoukry underlined the Egyptian […]